As some of you may know, I decided to conduct a Booktube census.  I was inspired by Hank Green who for the last two years has conducted a Nerdfighter census, and I was quite curious about the demographics of our community.  I had a few snafus with this project.  While surveymonkey is an excellent website, I could only do ten questions at a time, which isn't a big problem, but it would have made life easier.  Also you can only see 100 responses at a time.  So there are about twenty responses that I couldn't even use.  This was also an easy fix, but it definitely made it a challenge.

Now I'm sure you may or may not be wondering if I'm even qualified to tell you about this data.  I definitely would not say I'm "qualified", but I am a math major who took AP Statistics in high school and did well enough to test out of one of my Stats classes.  So we're going to go with yes! (that's an excited exclamation point not a yelling at you exclamation point).

So let's get into the survey results!

The first question was "What is your gender?"
These results were what was expected.  There was approximately a 9:1 female to male ratio.  However what I found quite fascinating is that a little over 1% of our community is not male or female, about .76% is transgender.  While that is not a large portion of people, I still found it a larger portion than I expected.  Other than that though there was nothing particularly exciting about these results

The second question was "What is your age?"
These results also were what I expected.  We are predominately mid teen into our mid twenties.  I did find that a large portion of the community was in my age bracket (18-21), which actually surprised me because I feel most of the people I communicate with in the community are either much older or much younger than I am, but the thing I found the coolest is that we almost have a true bell curve.  For those who aren't remotely interested in Statistics a bell curve is a good thing :). Here's what the graph looks like (I'm really only showing you the graphs that may be somewhat interesting I don't want to show them all to you). 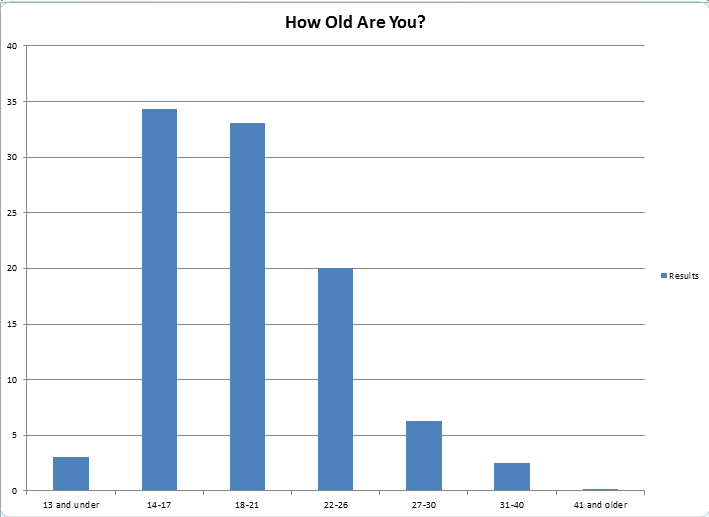 The third question was "Where are you from?"
Once again these results aren't super shocking.  The top four countries were the U.S., the U.K.,  Australia, and Canada (in descending order).  However there is a vast portion of people from other countries.  While I didn't have a great pool of countries (I picked countries that showed up on the analytics on my YouTube channel so I will admit it was a poor pool).  Now I could unfortunately only look at the first 200 comments in the others section.  However some of the more popular other categories were Belgium, Ireland, Argentina, and Portugal.  Some of the ones that I found interesting and surprising were the UAE, Turkey, Serbia, and Malta.  There were quite a few interesting countries that popped up that I hadn't anticipated. 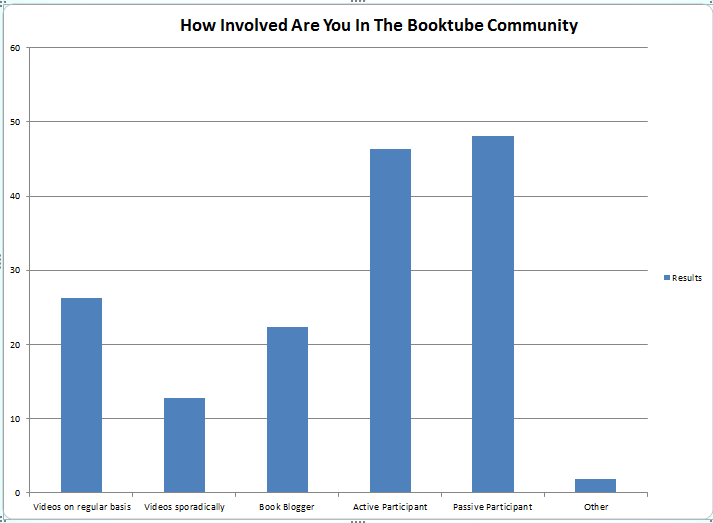 The fifth question was "Who's videos do you watch most frequently?"  I specifically worded it this way because I wanted to see who's watched most frequently rather than who are most people subscribed to because you can look up everyone's subscriber count.  What I found most interesting is that the booktubers with the most subscribers were not necessarily watched the most.  I actually ended up comparing the number of subscribers to the percentage of people who watch them frequently.  I ended up making the subscriber count out of 100 so it goes along with the percentage.  When looking at it like this, 23 of the 34 booktubers are watched more often than they are subscribed to.  There is however a potential for bias since certain booktubers did help spread the survey via Twitter and Facebook, but that percentage shouldn't be too large.  So now it brings the question of why do people watch videos more often than they subscribe.  I also would like to add that there were a lot of responses in the other field, which I really really appreciate it was hard to keep up with all of them, but I know I missed some fantastic booktubers.  So here is the chart for just the number of people who watch these youtubers.  I don't want to show the comparative chart because I don't know how people feel about others seeing their subscriber account (yes I know it is public, however it is a touchy subject for some and would not like to step on anyone's toes). 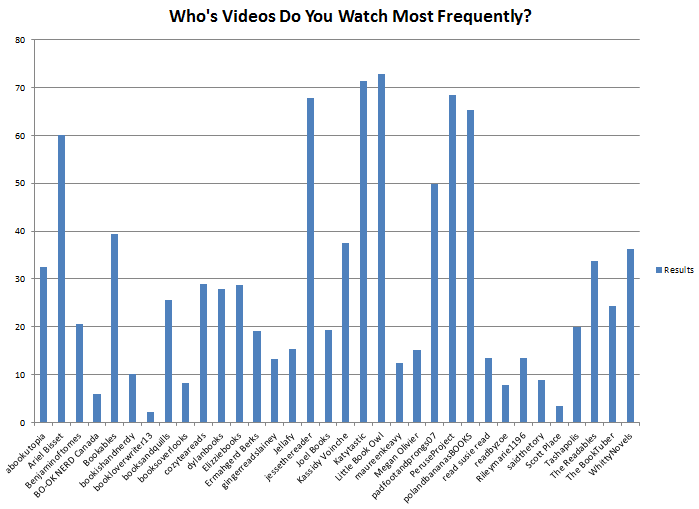 The next question was "What genres do you generally read?"  I picked this one because I know a lot of people think booktube is too YA centric.  However 96.5% of people who responded read YA.  Now I also understand that there can be response bias, but I don't believe it could be that major because I did have a rather large pool of responses.  So essentially keep reading YA if you want to, and don't worry so much about it being a focus on booktube, but definitely still branch out because the more variety the better.  However what I found was shocking that for all of the other categories with the exception of the other category and non-fiction, at least thirty percent of the participants read each of these genres (I know that was poor wording, but the graph will show it all!).  Also I was shocked that 15% of people read non-fiction as well. So here is the graph. :) 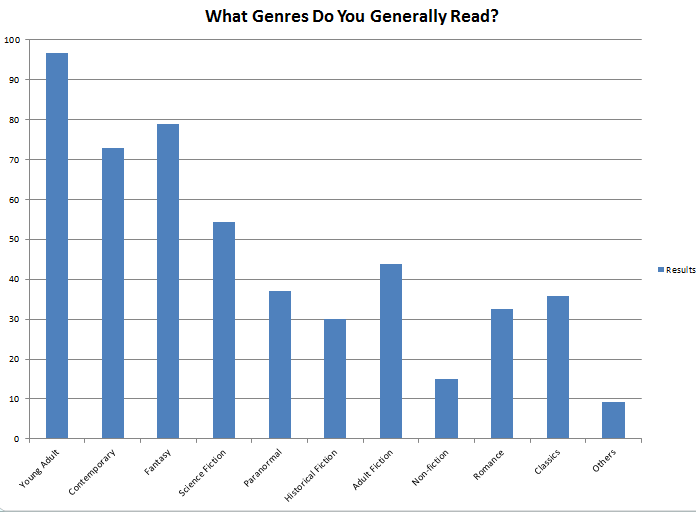 The next two questions I want to talk about together, and they are "Which videos do you watch most often?" and "What videos would you like more of?"  Not so surprisingly most people watch hauls most often, and the followed by TBRs, which I wasn't expecting.  I don't like making TBRs but as I thought about it I really enjoy watching them.  By far people would like more recommendations videos.  This was slightly surprising to me because it seems whenever someone asks what videos they want more of it is review videos (which also was highly requested).  Also some of the more common answers in the other category were discussion videos and original content.  I wanted to see what viewers would like to see more of so we could branch out as a community, and possibly show our viewers some of the content that they wanted to watch.  Here are both of the graphs. 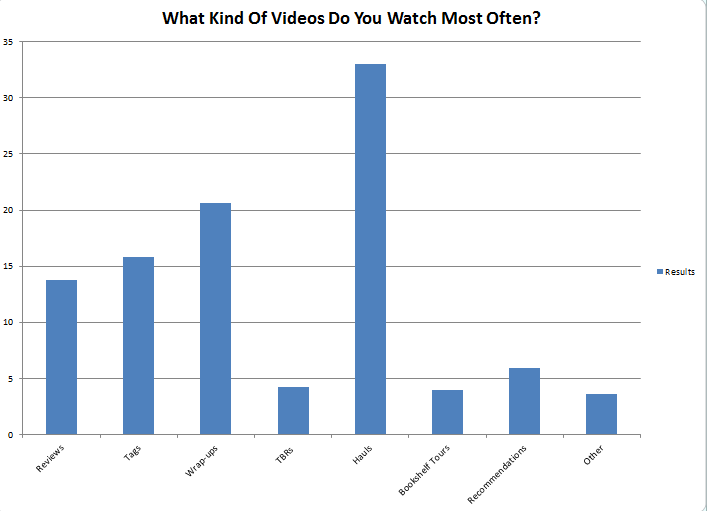 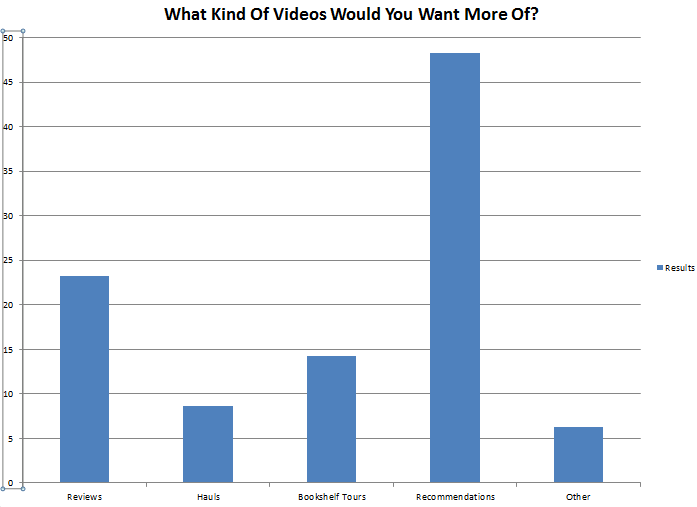 P.S. sorry about the fact that the axis is highlighted, but I'm too lazy to redo the picture. It's been a lot of work.

The next question was "Favorite authors."  This was just because I was curious.  However I believe a picture is worth a thousand words so I will just show you the graph :) 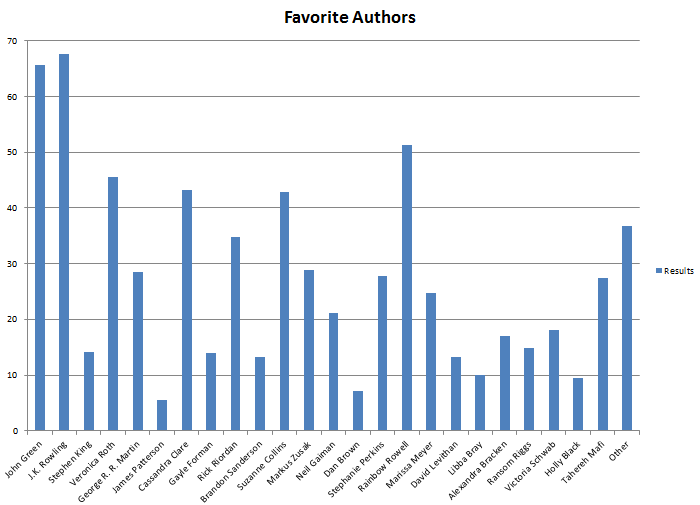 The last question was "Have you been to a book event?" Again this was a question that I was just curious about because I want to meet as many people in the community as possible, and book events are one way to meet people.  Also this was a segway for a question in the next Booktube survey I want to do, but you will have to wait and see (or watch my video on my youtube channel you can probably guess what I mean).  This is also one where I think the graph gives a more accurate description than I could so here it is :) 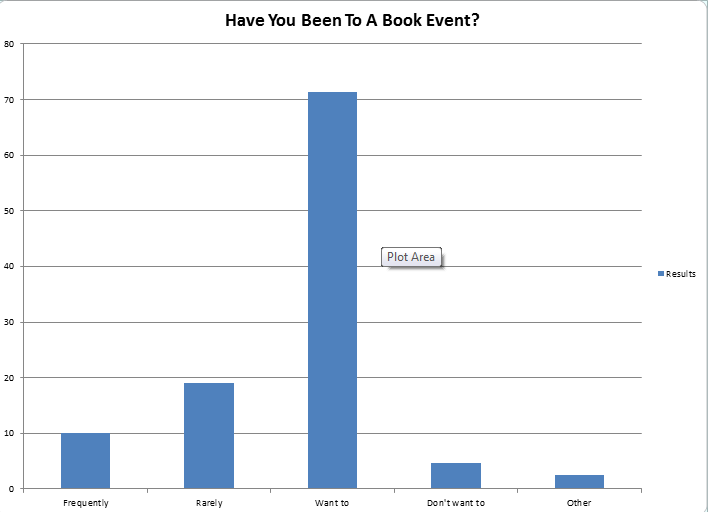 If you have any questions will be more than happy to answer them, and any and all comments would be appreciated!
Posted by Unknown at 9:10 AM